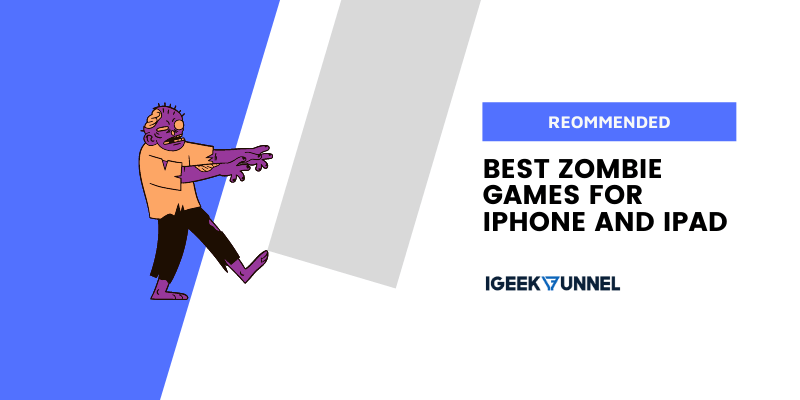 Zombie games have now become a popular and most favorite genre among online gamers across the world. They are gaining immense popularity and have one of the most loyal fan bases who love to play zombie games for hours.

Since you’re reading this post, we’re guessing that you love zombie games and searching for the best ones to play on your device. Here we have curated a list of the best zombie games for iPhone and iPad. Let’s have a look!

Dead Trigger 2 is one of the most popular zombie survival shooter games available on smartphones. The game is old but the time-to-time updates have kept it interested and exciting.

This is a First Person Shooter game where you have to survive in a zombie apocalypse. Here you will find a lot of challenges that you have to complete, which will take a lot of time to finish. Also, there are over 600 gameplay war scenarios, more than 70 types of gun weapons, and over 10 regions to play.

The objective of the game is to kill zombies while completing missions. You will start with limited health and weapons. Also, you can choose between a touch control or an enhanced virtual joystick.

Furthermore, you will get numerous weapon choices – melee weapons, pistols, guns, and gadgets. You’re also tasked with building a personal hideout with the help of characters such as the Gunsmith, Scientist, Smuggler, Medic, and Engineer.

Into the Dead 2 is another best zombie game that comes with a goal where you have to try and rescue your family from zombies. The game has an evolving story and multiple endings. You have to complete 7 action-packed chapters, 60 stages, and hundreds of challenges. Also, there are powerful weapons and ammo perks that you need to unlock. The game can be played in three different modes; story, daily, and survival- each of which can trigger both fear and aggression in players.

The gameplay is undoubtedly exciting- fire from military gun emplacements, slay the hordes from atop vehicles, stab them to stay alive, or risk going after them on foot. In addition, you need to discover different locations, from oil fields and military bases to campsites and rural farm communities.

The game is free to play but offers some game items for purchase with real money.

3 – The Walking Dead No Man’s Land

The Walking Dead No Man’s Land is one of the top zombie games out there. It is a thrilling action-packed RPG where tactical choices make the difference between life and death. The strongest one will survive so you need to choose your team wisely.

In this game, you have to fight through hordes of deadly enemies, collect and upgrade your favorite characters from AMC’s The Walking Dead Series. Train your best Walking Dead survivors to fight zombies and relive the iconic moments of the Walking Dead show.

This zombie game allows you to team up with friends to fight the undead apocalypse. The Unkilled game is staged in New York City after a devastating zombie apocalypse that left its street crawling with the walking dead. Here, you have to fight for survival over 150 missions with an epic storyline.

In addition, target unique enemies and bosses, including SHERIFF, DODGER, MINESWEEPER, BUTCHER, and more. Five characters are available for you to choose from before you can become a part of the Wolfpack, an elite group with the sole mission to rid the city of the zombie plague.

There are more than 40 weapons in five classes, featuring the LSAT machine gun, the SAIGA-12K shotgun, and the M24 sniper rifle. Apart from killing zombies, you can build a large zombie army in the Skirmish ops to help you terrorize bases built by other players.

Plants vs. Zombies 2 for iPhone is completely free to play with some in-app purchases. How this game is different from other zombie games on the list? Here each plant has a special power that you can unlock by giving them plant food. This power is different for every plant and certainly adds an extra layer of strategy to the game.

The goal of the game is that you stop the zombies from getting one side of the garden to the other, where they will eat your brains. To stop them you are given a selection of ferocious plants which you must place on squares to stop the zombies. Each plant has different powers.

You have to earn Seed Packets as you play and use them to fuel your potent plants. Power up attacks, double-down defenses, speed up planting time, and even gain entirely new abilities.

Grow an amazing army of plants, supercharge them with Plant Food, and devise the ultimate plan to protect your brain.

Zombie Frontier 3 is undoubtedly one of the best zombie games available in the market that you can play on your iPhone and iPad.

The game comes with stunning graphics, solid gameplay, and several deadly weapons to kill the zombies. Here you have to shoot the zombies and survive the biggest apocalypse. The game features an exciting story mode with rescue missions. Shoot all the zombies to clear the areas and unlock new lethal weapons as the missions get tougher.

In this zombie game, you have a chance to become a professional zombie killer and test your shooting skills to survive in more than 120 levels! The game has 5 challenging bosses, 60 main missions, several secondary missions, 2 DLC maps, and many special events celebrated from time to time.

Zombie Gunship Survival is quite different and unique zombie game. In this game, you are playing the role of gunmen of AC-130 gunship and your goal is to protect the people from the zombies.

You’re spending a lot of time in the sky, aiming your AC-130 ground attack aircraft at the zombie hordes coming at the survivors beneath you. Here you have to collect realistic weaponry and increase your zombie shooting efficiency.

Moreover, the game also has the building mechanics where you will be building and expanding your military base that you have to defend against zombie assaults. 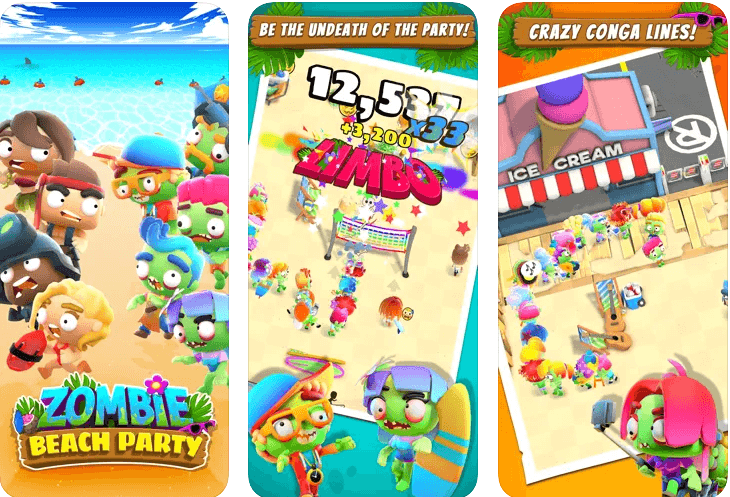 In this zombie game, you don’t need to kill zombies but you have to play as a zombie.  Zombie Beach Party allows you to party on a beach along with other zombies until you are hit by airstrikes and bullets.

In this game, you have to lead a zombie party, take zombies forward, gather various bonuses and dodge dangers. Also, you have to help zombies infect other people to enlarge their army. Don’t forget to stay away from police, military men, airstrikes, and other dangers coming from people.

Here in this game, your aim is to protect zombies from trouble, get rewards and enlarge the zombie collection. The overall gameplay is fun and you will enjoy it for sure.

Zombie Catchers is one of the casual zombie games that you can play on your iPhone. The game features a peaceful town with zombies around. Your target is to save the townspeople from the zombies.

There are two wealthy businessmen in the town, A.J. and Bud, who will provide you with all the weapons you need to fight off the zombies. In addition, you have to unlock exciting new hunting gadgets such as nets, weapons, guns, traps, and jetpacks to help you on your quest to catch zombies!

The game gets even more interesting when businessmen plan to hunt all the zombies to prepare tasty zombie juice for selling. For doing this, they need to discover new territories on the map and find unique zombies to collect and squeeze into lucrative food products!

Zombie Cathers is overall an entertaining game, and the quality of the design and production are excellent.

Dark Days is another iOS zombie game where the entire world was turned into bloodthirsty zombies. People fled their cities to find shelter from the walking dead. They started building shelters to survive in the new post-apocalyptic landscape.

At the beginning of the game, you don’t have body armor, food resources, weapons, etc. Everything needs to be collected and used with smartness.

A player has to fight, gather resources, craft weapons, and equipment, build their shelter and survive. Dark Days combine the best parts of shooter and survival games in one. This zombie game offers unlimited action till its last second.

So this was our list of the best and most thrilling zombie games that you can play on your iPhone and iPad. The games are full of action and keep you engaged all the time. Most of these games are free to play, but there are optional in-app purchases that you can use to get some additional benefits in the game.

So which one do you like the most? If you know other exciting and action-packed zombie survival games, comment below.