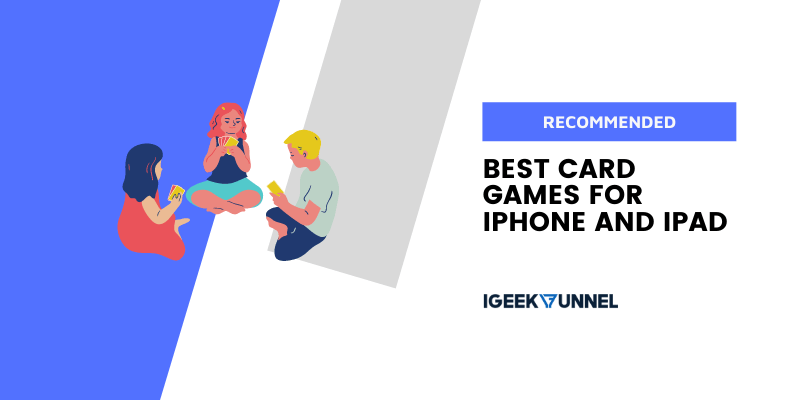 Card games are undoubtedly one of the most entertaining and engaging ways to pass the time and have fun with family & friends. They can be played at any time and in any place.

In this latest article, we are going to share the best card games for iPhone and iPad. These games are not about gambling. You can play these games in your free time, whether with friends or alone.

Uno! is an online version of the familiar family card game, with new rules, world series tournaments, modes of play, and much more. In this game, players mostly play with randomly selected players from around the world. The aim of the game is to lose all of your cards or get the lowest card score by the end of the three minutes.

The app allows you to compete in tournaments and events to win free rewards and top the leaderboard. There are a number of versions of the game that can be played including playing as a single or in partnership with another player. The basic mode involves joining an online game and playing by the traditional rules. There’s a ‘2×2’ mode, with a player and a partner-facing off against another team.

Now, you can play UNO whenever and wherever you want. There is no need to keep UNO cards with yourself anymore. Just take out your iPhone and start playing your favorite card game.

Spades+ ranks as among the more popular card games. It is the free Spades card game for iPhone and iPad! The game has countless new features, improvements, and bug fixes.

If you are a beginner and don’t know how to start this game, there is a simple tutorial that will help you get in the game fast. Also, there is an automatic game-saving feature, just in case you get a call right before you achieve your blind nil bid. Plus, the app provides a realistic look and feel to make the game more interesting. It offers both easy and hard achievements to unlock.

If you love playing Spades with physical cards, you should try this live online multiplayer version. 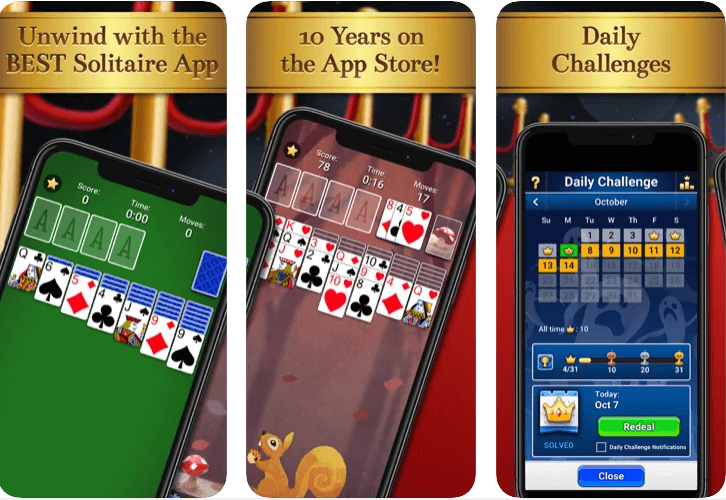 Solitaire is another best classic card game that is available free for iPad and iPhone. The app makes it quick and easy to learn how to play solitaire on your smartphone.

You need to tap or drag cards to arrange them in descending order with alternating colors. When you can, move cards up to the foundation to sort all of the suits from Ace to King. You have options- either draw one card at a time or draw three for a challenge to train your brain!

The app comes with daily challenges that will help users earn crowns and trophies, so you can level up and get new titles. You can even change your background, card backs, and card faces for a personalized experience. Also, there is a “Show Me How To Win” feature that helps you improve your strategy in the game.

There are unlimited hints and Undos to help you win the game.

CardGames.io is a collection of all your favorite card games, solitaire, and puzzle games. This application is for all those people who love playing card games but do not want multiple game apps to play them.

The app allows you to play many games in multiplayer mode against your friends, including Hearts, Spades, Euchre, Whist, Lockup, Chess, Checkers, Reversi, and Backgammon. Also, you can view and store statistics of all the games you’ve played and use different avatars every time you play.

Phase 10: World Tour is a very popular Strategy, Card, Single-player, and Multiplayer game. Throughout the gameplay, the player has to compete against several top card players by completing the phase first. In multiplayer mode, the player competes with all over the world in an online system

Every Phase has its own sets of cards to collect. When you have your sets, throw them down for everyone to see. The Phase is finished! This card game app for iPhone helps you develop your skill with the game. It comes with new challenges on every level to test the player’s skills to unlock new rules.

There is a second chance for the player who can’t finish for the first time. It all depends on your luck and the strategic moves to tackle the challenges and be the winner.

Hearthstone is another hit on the list of best card games. The game itself comes with hundreds of cards so that you can build some truly unique decks. It builds upon the already existing tradition of the Warcraft series by using the same elements, characters, and relics.

Join the battle with your favorite Warcraft heroes like Illidan Stormrage, Jaina Proudmore, and more. Explore iconic locations from the beloved Warcraft universe as you master your deck, collect cards, and assemble powerful combos.

Get ready to experience the magic, mischief, and mayhem with your friends. Battle with friends and join the millions of players around the world to enjoy Hearthstone. Also, if you don’t like to play online, then you can also indulge in rich single-player missions.

Overall, it is a good card-based strategy game if you are looking for a title that requires you to think and act quickly.

Star Realms is a wonderful spaceship combat deck-building game. It combines addictive deck-building gameplay with exciting Trading Card Game (TCG) style combat! The game provides tons of gaming features for free, and a one-time upgrade to be able to play with your friends and more on any device.

As you play the game, you make use of Trade to acquire new Ships and Bases from the cards being turned face up in the Trade Row from the Trade Deck.

If you have no idea how to play this card game, you can go through the tutorials that teach you to play effortlessly. The objective of the game is to obliterate your foes and conquer galaxies. 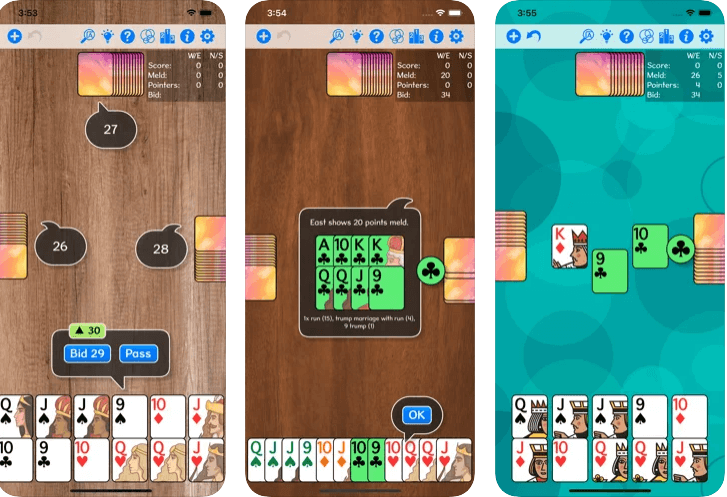 Pinochle is a card game played with a 48- or 80-card deck of 9s, 10s, jacks, queens, kings and aces. This full-featured, ad-supported pinochle app for iPhone and iPad is updated frequently with user-suggested features and AI improvements.

In this game, you have to follow the repeating sequence of bidding, melding, and trick-taking. Players score points by melding various card combinations and by taking tricks.

You can choose to play the single or double-deck with configurable options. The app allows you to team up with a computer partner called North and two computer opponents called East and West. 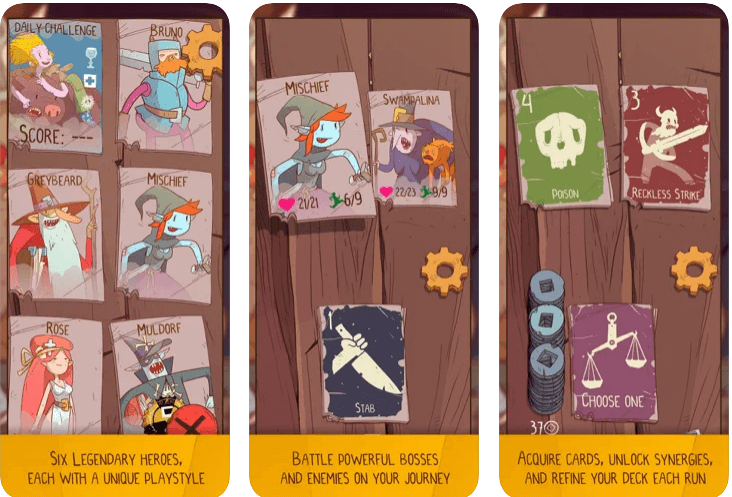 Meteorfall: Journey is quite different from other card games on the list. Here you’ll choose your class from one of four unique adventurers and then set out with a deck consisting of some basic attack cards. As you progress in the game, you’ll be presented with the opportunity to add powerful new cards to your deck.

This card game includes various bonuses and rewards, helping you enhance the skills of the main character in the confrontation with opponents.

Between battles, you’ll venture through different locations, represented by an encounter deck. You’ll encounter blacksmiths that can upgrade your cards, temples that can help you optimize your deck, and mysterious characters that will make you all sorts of bargains.

Here in this game, the cards allow you to perform various combat moves. If you lose a battle, you’ll have to start again from the beginning. 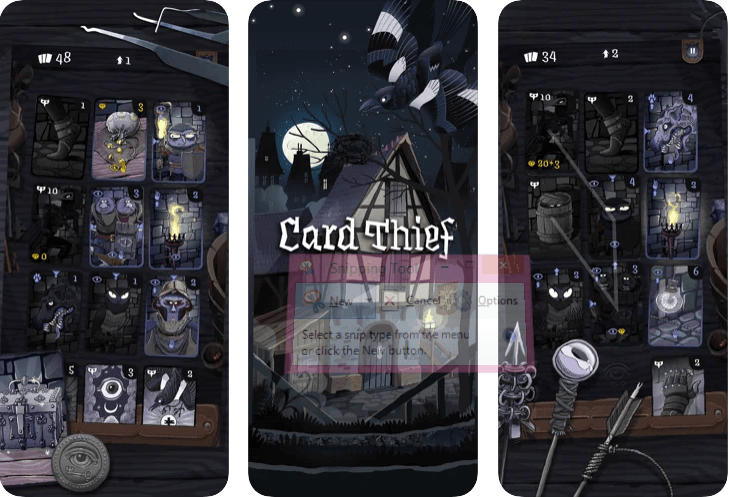 Card Thief is easy to play card game that follows the style of Solitaire when it comes to gameplay and fuses plenty of its own interesting elements into it. In this game, you have to go through a lot of levels of the horror story.

The game takes you on terrible adventures in a world full of treasures and valuable resources that you have to win. You have to build your base and protect it. Steal jewels and get cards of legendary monsters. All your cards will be used for a robbery. Create a unique deck and become a professional thief.

In 4 different heists, you can test your skills against various enemy and trap types. You’re a stealthy thief, and your goal is to acquire items and make your way back to your hideout at the end.

By completing heists you can unlock equipment cards with great power to play in your next match. In this popular card game, you have to improve your card levels to become even more powerful and better. Beat your records and earn exclusive rewards that will help you grow in the game.

So, these are the card games that you can play on your iPhone and iPad. These games will help you enjoy and relax your mind. Using any of the games mentioned above, you can do a brainstorm and challenge your skills.

If you have your favorite card games that are not included in the list, do not forget to share them in the comments. Also, let us know which game you chose from the list.