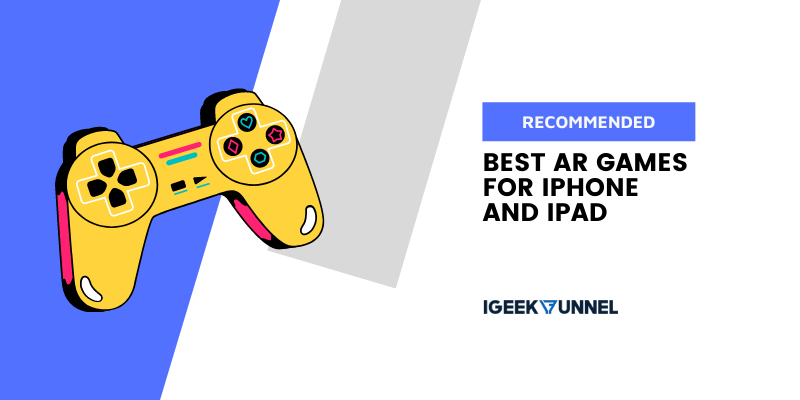 If you are a big fan of AR games and want to play on iPhone and iPad, don’t skip this post until it ends.

Augmented Reality or AR is a technology that brings your digital environment to reality by placing virtual objects in the real world. With the launch of iOS 11, Apple turned hundreds of millions of iPhones and iPads into Augmented Reality-enabled devices. It became possible with the help of ARKit, which is a new framework that has allowed developers to create augmented reality experiences.

ARKit is the platform designed by Apple for the development of Augmented Reality apps for iPad and iPhone, which allows developers to build AR experiences quickly and easily.

So without any further ado, let’s jump to the main section, which is about the top AR games and applications for iOS mobile devices. 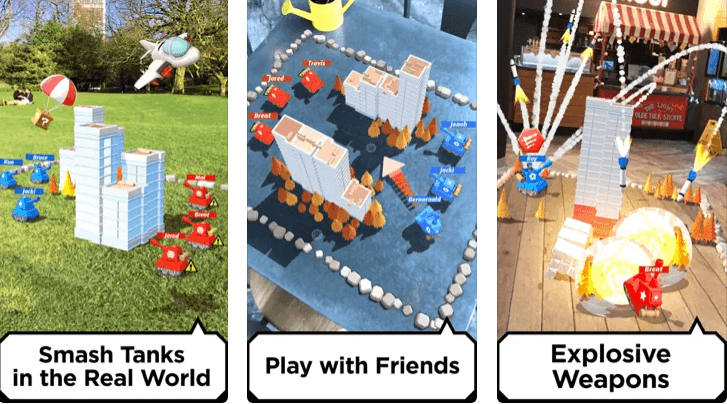 Smash Tanks is a turn-based strategy tank battle augmented reality (ARKit) game for iOS. The two sides consisting of three tanks each, fight against each other in a small destructible battlefield. Your goal is to fling your tanks into your enemies to deplete their health.

In this AR app, you will face off against an opponent on a digital map in the real world. The match will start with 3 tanks colored in red or blue on a map filled with trees and buildings. You have to eliminate your opponent’s tanks using rockets, bombs, and ballistic missiles.  There are three rounds in total, the first one to win two rounds win the entire game.

Also, there are a few power-ups that will drop randomly. They can range from bombs, rockets, lasers, and even nukes.

The best part is you can play this digital game on top of real landscapes and environments. So if you’ve been looking for an easy, accessible, mobile augmented reality game, Smash Tanks is the right choice.

Pokemon GO is one of the popular and best AR games out there. The game was released in 2016, and everybody liked it. To this date, it continues to receive new content and updates from developers.

The game is quite simple and easy to play. You need to walk around your native environment (in the real world), and your in-game map will show you where you can find and catch Pokemon. Your smartphone will vibrate when there’s a Pokemon nearby. Now you have to stay alert to capture the pokemon around you, or it might get away.

This AR game encourages people to get out of their rooms and explore the world around them. Pokemon Go is all about physically covering as much ground as possible on foot and capturing the Pokemon scattered across your city. 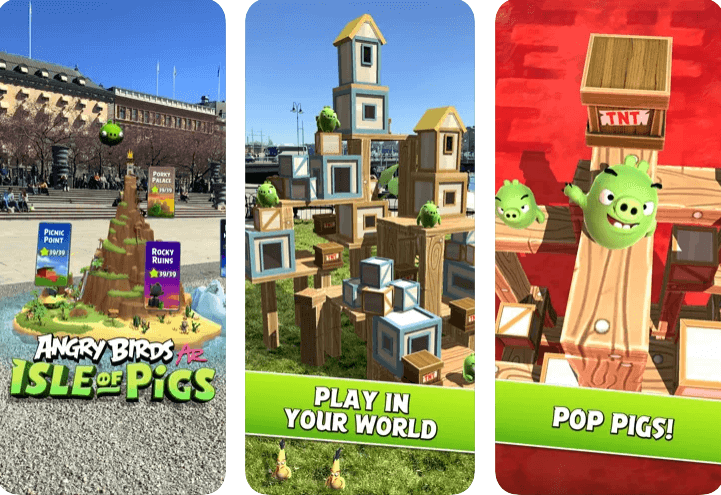 Most of us are familiar with Angry Birds. There are a certain number of birds to destroy all pigs from each scene. Each bird has different abilities, and the environments are set up to make life difficult for you.

Now, there’s an augmented reality version of Angry Birds where you have to kill the green pigs by launching birds at their haphazardly constructed forts, earning coins based on how efficiently you crush them.

The game can be played on any flat surface by pointing your phone camera at it. Then, it’s a simple matter of aiming, adjusting your angle, and launching the birds.

There are 78 levels to unlock in total with different themes, including Picnic point, Rocky ruins, Frosty Hideout and Porky Palace. These levels can be unlocked by using coins in the game.

In addition, you can uncover hidden surprises in order to take on the green pigs and earn more points. You can even make the game large or small to fit your space and customize your experience.

The graphics of Angry Birds AR are really good. The gameplay gets a fresh feel in the AR mode and adds more fun to the game.

Kings of Pool is another hit on the list of best AR games for iPhone and iPad. The game is for the more competitive players out there. It features leaderboards, decent graphics, and a trick shot engine for you.

Kings of Pool uses the technology to make virtual pool gaming more realistic for the players. It has easy and precise controls to easily make smart moves. In this AR game, you have to face off against skilled 8 ball pool players from around the world. Then you can win and gain access to exclusive high-stakes tables, build up your cash and become the richest billiards player in the game.

If you are among the ones who like to play 8 pool games at any time and anywhere Kings of Pool is for you. 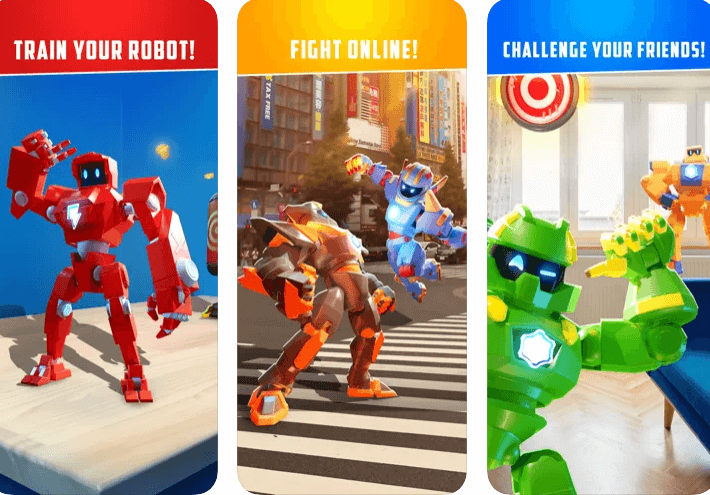 The next one is AR Robot. It is one of the best virtual fighter AR games for iOS devices, where players build a fully customizable robot, train him up, and battle against other robots.

It features over 90 unique robot parts, 60 paints, and a range of power cores to create a robot in your own unique style. You can train your strength, defense, and precision by playing 3 unique mini-games. It will help you increase your skills and upgrade your robot to be a true mechanical warrior.

Battle bots and climb the ranks, enter new leagues and fight against the rivals online. You can also enter a common virtual playspace with friends using ARKit 2.0’s Shared Experiences and use your own devices to set your robots against each other.

If you are a kid, you may enjoy playing AR Dragon. The game is about raising a dragon from the moment it hatches, and every day you log in to find the beast has gotten a little bigger. It makes you happy seeing your dragon larger in size each day.

No two dragons are the same means every dragon is unique and that’s the special thing about this game. You have to take care of your dragon- play with them, feed them, collect hats and fancy skin to dress up your dragon. 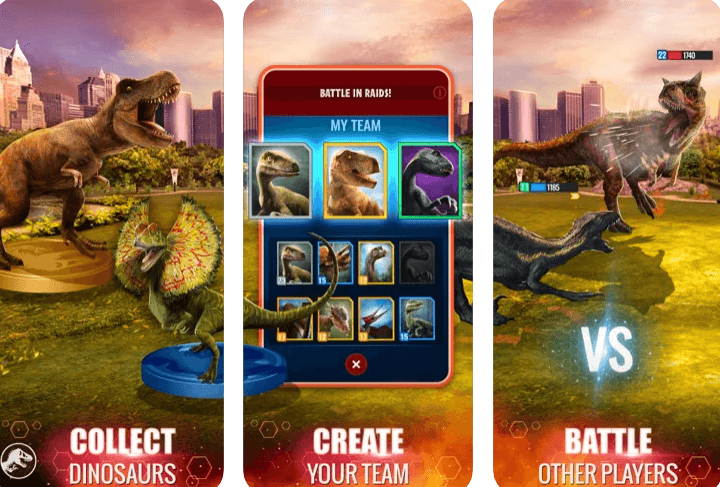 Jurassic World Alive is one of the best AR games for iPhone and iPad users. In this game, you are part of the Dinosaur Protection Group, to find and protect the dinosaurs from extinction.

Finding dinosaurs involves walking around the real world as you do in Pokemon Go, although there’s a long-range on the map so you can see creatures in the distance and head that way. You will explore your world to find your favorite Jurassic World dinosaurs, including new breeds that are more awe-inspiring and terrifying than ever before!

You can collect rare and stunning dinosaurs to level up and create hybrids in the lab. Also, battle teams of dinosaurs to defend and challenge others. Battling is against real-world opponents, so you essentially have to wait for them to come to the arena, after which it’s a turn-based battle. If you have powerful dinosaurs to battle, there is a higher chance of winning. 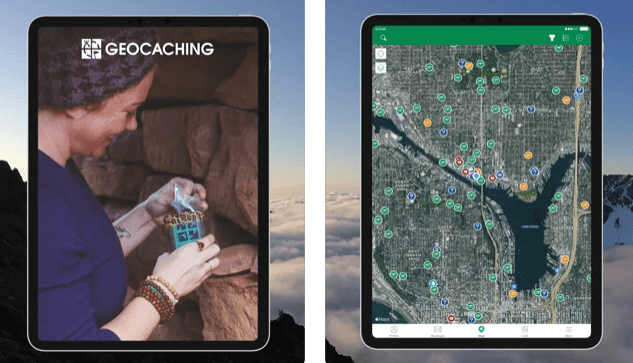 It is the official app for geocaching that has everything you need. The app takes you through the adventure of finding your first few geocaches. You will get the tips, hints, and instructions for geocaching as well as using the app.

Geo-caching stands out from other AR games with its treasure hunting persona. You can explore their surroundings and search for Geocaches. The app lets you easily navigate to the cache using the map, compass, or driving directions. Plus, you have to find all traditional geocaches and geocaching events. You can also take help from other players for tips, hints, and more.

Premium members can filter geocaches by size, type, difficulty, terrain, and found/owned. They can also sort lists of geocaches by distance, favorite points, or geocache name.

All in all, Geo-caching is a highly interactive AR game that lets you find geocaches and hide them again to locate them. 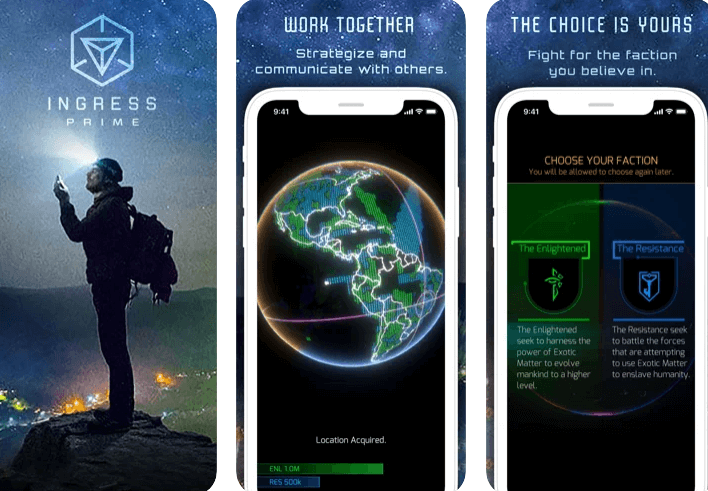 Ingress Prime is quite similar to Pokemon Go. Players have to interact with places of cultural significance such as public art installations, landmarks, and monuments to collect valuable resources using their Ingress Scanner.

It was one of the first AR games that featured location-based gameplay. There are two factions- the Resistance or the Enlightened, and you can join one out of two. Each faction is battling for control over different territories and the world’s energy. You can dominate territories by linking Portals and creating Control Fields to achieve victory for your Faction. The features of this game are amazingly engaging, immersive, and interactive.

The game is unique like its name. You have to discover Emily’s Coaster City. There are thrilling tracks, a Ferris wheel, a carousel, and much more are waiting for you in the Coaster City! Collect all the minis and toys that come your way.

You can create your very own train set piece by piece and bring it to life with Thomas and all his friends. The game lets you customize without any limits. You can build tons of exciting tracks, from twisting turns to rattling ramps. Also, rocket yourself through spectacular stunts, bold boosts, and raging rollercoasters!

Make your train set amazing with tall trees, beautiful buildings, and dazzling decorations. So, ready, set, build, and experience it like never before with Augmented Reality!

This was our list of best AR games that can be played on iPhone and iPad. If there is another exciting and engaging Augmented Reality game that you want us to try, mention it in the comment section. We will update it on this list.

Also, which AR game out of these ten do you like the most? Let us know in the comments.