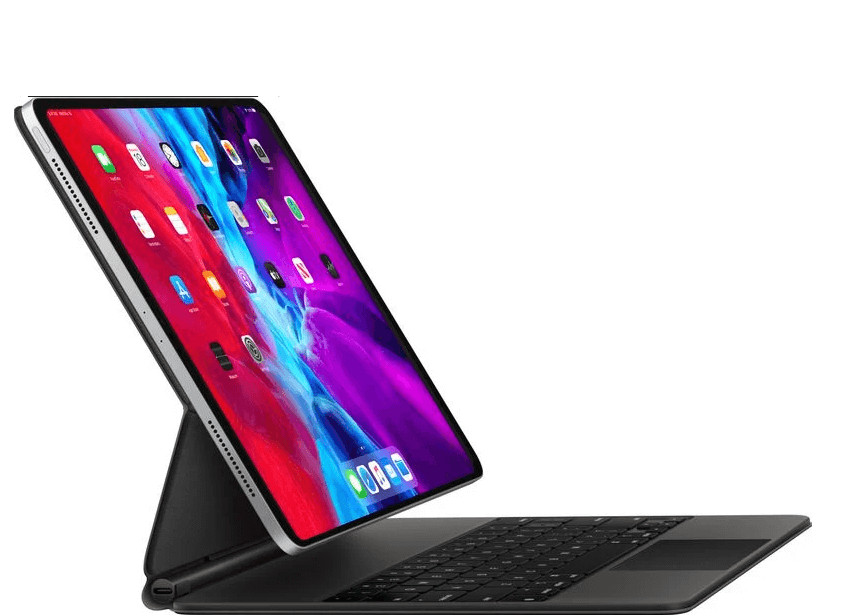 On 18 March 2020, alongside the iPad Pro Apple revealed a new magic keyboard for iPad Pro 12.9-inch.

Most of the big publications gave it a positive response. At first glance, for some, it looked like the same as the previous smart keyboard and for others, it’s the product that users are looking for.

With a built-in trackpad, smoother cursor movements, and a magnetic stand, Apple’s magic keyboard seems much sturdy and convenient for iPad users. Especially for the users who want to use their iPad as a laptop.

As you know, iPad Pro 2020 with iPadOS 13.4 is available to buy now. On the flip side, Apple’s Magic Keyboard is still up for a preorder on Amazon yet Apple announced the official released date of 30 May, which is just 2 weeks away from now.

However, in one of 9to5 Mac’s posts, they claimed to not see the release date in Amazon US. Still, when you select the product on other countries’ sites like the UK, it’ll show the release date of 30 May 2020.  In the headline, they said not to trust on the release date.

Chances are it’s not a release date and the website could be just a placeholder. It’s also possible that it’s a mistake but Amazon is not a kind of micro-brand to do such a silly mistake. It seems like Apple hasn’t provided an official release date yet. It’s possible, we’ll have to wait a bit longer to test Apple’s Magic Keyboard.

One thing is obvious, the COVID-19 pandemic is a reason for slowing down production and supply. And Apple is suffering from the same loss as the whole world?

One thing is quite noticeable that iPadOS 13.4 is compatible with the third party mouse and trackpad to use them as input devices. Except for this feature, igeekfunnel is here to tell everything you should know about Apple’s Magic Keyboard for iPad Pro.

So, let’s get started.

The same as the Macbook Pro 2020 (13-inch), Apple has already upgraded the problematic butterfly mechanism in the previous keyboard. In the new Apple’s Magic Keyboard, the company is using the scissor mechanism. This mechanism is useful to give the user a responsive and fatigue-free typing experience like a user feel while writing on an Apple’s desktop/laptop.

Alongside the scissor mechanism, the new Apple’s Magic Keyboard comes with an ample amount of key travel which is 1mm. Most of the users tried claimed they had a wonderful experience with new typing upgrades of Magic Keyboard. Even while typing a long detailed review post on a product.

Moreover, Apple’s Magic Keyboard got enough amount of spacing for its keys. This will helps users to type without getting frustrating and interfering with the other fingers.

The magic keyboard also comes with inverted “T” arrows which are recently introduced in Apple 13-inch and 16-inch Macbook Pro too. This feature allows users to get a clear recognition and confusion-free typing experience while doing a long-hour work. It’s a useful feature for touch typists.

As the product hasn’t released yet we’ve only one way to determine the dimensions of it, which is the Amazon product description. However, it doesn’t seem Amazon has the correct and all details of Apple’s Magic Keyboard. According to Amazon, the weight of the product is 641 grams. Although, 9to5 Mac make a guess about the weight by doing some calculations:-

Let’s say packaging takes up one-third of the overall product weight. That would mean the new Magic Keyboard comes in at around 700 grams.

I think they made a pretty guess about it. When I checked the unboxing of Apple Magic Keyboard on Marques Brownlee’s Youtube channel, I found him explaining the weight of the Apple Magic Keyboard in many details. In his video, you see Apple’s magic keyboard is weighted 702 grams. Yes, it’s heavier than a 12.9-inch iPad.

In conclusion, the new Magic Keyboard is 57% heavier than the Smart Keyboard Folio. Clearly, that much weight seems a negative point from the perspective of usability and comfortability.

As we talked before it’s much heavier than the recent Smart Keyboard Folio, we can also say everything comes with its own pros and cons.

Due to its heavier build, Apple Magic Keyboard provides a solid, sturdy, and stable performance. On the other hand, users will find a bit of struggling to open it just because of its heavy weight.

However, there’s lots of stuff going on but in brief, we’ll divide the case into three parts. When you’ll open the case, at a particular angle the upper part will get a hinge.

The upper hinge is made by the magnet and will be used to attach the iPad. Users can use the lower hinge to tilt the upper part where we attached the iPad.

In that way, you can tilt the attached iPad up to 130 degrees to whatever viewing angle you’re comfortable with. What users like the most are that it doesn’t look like a normal laptop after attaching the iPad with it. iPad will actually look like it’s hovering in the air that looks pretty amazing.

The third part is the base, with a keyboard and a trackpad that has a silicon rubberized material. It’s even useful to prevent the iPad from any scratches or damage while opening or closing it.

In between folding points, you’ll see a USB-C port that users can use to charge the iPad.

However, it charges the iPad at less speed in comparison with direct charging to an iPad. Also, users can’t use that port to transfer data, connect external basic accessories such as display or HDD.

One thing everyone likes the most was the powerful magnets, Apple is using in the upper hinge. The upper hinge part holds the iPad with great resistance that users can roam around wherever they want without worrying about the accidental detachment of the iPad.

It’s easy and smooth to detach and attach the iPad that makes it more convenient even when you’re in a hurry.

If we talk about the maximum tilt point of the screen, it’s from 90 degrees to 130 degrees. Some of the users don’t feel it right. It seems right but at certain moments you’ll feel the need to bend it more to get the right angle and a clear screen vision. For example, while traveling in a train and using it by placing it on your lap.

Although users would like the floating screen feature. It feels a bit closer to your eyeballs which feels satisfying.  Also, it feels closer to your face and comfortable for your fingers to use that floating screen. However, due to its bulky weight you’ve to use both hands to move and fold the screen. Yup, it’s not that smooth but once you set up you’ll ready to go.

Let’s talk about the trackpad of Apple’s Magic Keyboard. It’s tiny, covers less area yet much responsive than the previous Smart Keyboard Folio. However, you’ll feel a bit frustrated while using its small size trackpad, especially if you’ve got a habit to use the laptop with a large trackpad surface. However, every problem has a solution and you’ll get used to it within a few hours.

Furthermore, it’s much more accurate, lag-free, and smoother than most of the keyboards not just only the Smart Keyboard Folio. You’ll feel the same accurate response from every corner of the trackpad, no, matter where you’ll click.

In addition, you can use some finger gestures to access different system functionalities. For example, opening a terminal on Mac. Users will be able to surf multitasking tabs and home screen by swiping 3 fingers downwards on the trackpad. Also, the user can swipe in the left or right direction to switch the apps from the recent open apps.

Users can also access settings like the notification center and control center by sliding the cursor on the edge of the screen.

Yes, sometimes, it’ll be annoying because you try to search for something else but due to a tiny trackpad and a 12.9-inch screen, you’ll end up opening the settings slide. Also, Apple’s Magic Keyboard got another negative point which is not supporting the 3rd party apps.

However, it works perfectly fine with the new iPad 13.4 but sometimes a user will get a bit off the experience, even while using the Google apps. According to Verge, sometimes selecting a piece of text could be a mess. And on the other times, the cursor gets failed to do its neat shapeshifting tricks.

Also, you’ll not be able to swipe up some stuff with the trackpad which can be moved by using your fingers on the screen. Honestly, except for the smoother and lag-free experience, a bit more of the points were on the negative side.

Furthermore, Apple upgrades the new Magic Keyboard with some trackpad and mouse gestures. If you’ll learn them it could be easy to get used to it. To know the gestures, press and hold the”command” at any screen. The iPad screen will show you a list of all the trackpad commands or gestures. Although we make a list on that keyboard/Mouse gestures.

Apple’s Magic Keyboard comes with keys having a backlight feature. So users don’t have to look for a particular word while working in a dark room. However, you’ll get annoyed with these lights while watching a movie. Also, there is not a key on the keyboard to control the backlight brightness of keys. To change the brightness of keys backlight, you’ve to open settings> General>Keyboard settings and Hardware keyboard.

You’ll see a keyboard brightness slider after 3 settings. Slide left to right and set the brightness level you want.

Apple tried to make it more user-friendly by adding these settings on the iPad but everyone knows what’s more convenient:- going through some settings or pressing a keyboard key.

Apple’s Magic Keyboard compatible with all the 11-inch iPad Pro models which come with 1st and 2nd generation. Besides, It has the compatibility of iPad Pro 12.9-inches models with 4th and 5th generation. Hence, Magic Keyboard comes with a new mouse and trackpad gestures, you should have an iPad Pro with iPadOS 13.4 version.

No doubt, Apple made a better-upgraded version of the previous Smart Keyboard Folio. However, it’s not even perfect and lags some features and comes with its own Pros and Cons. For example, it’s a fatigue-free soft keyboard that gives a great typing experience. And a tiny, smoother, and much responsive trackpad without any lag. Likewise, most of the users didn’t like the heavyweight of it.

Well, let’s do a price comparison.

Moreover, I’d like to say if a person uses the iPad most of the time and sometimes he/she works on a laptop, then you can go for it. It’s the best buy for these people.

On the other hand, the user spends most of the time working on a laptop, he/she should invest money on Macbook like Apple Macbook Pro 13-inch.

So, that’s a detailed review and important points of Apple’s Magic Keyboard that you should definitely know. I hope you’ll like it and got great value from it.

Don’t forget to share this article with a new magic keyboard user who’s struggling to know some features or planning to buy this new Magic Keyboard.

As a bottom-line here’s a walkthrough review of Apple’s Magic Keyboard by Marques Brownlee.