Technology is evolving every day, rapidly as lightning. The reason is simple; we want to live a smarter and hassle-free life. Smartwatches and Fitness trackers are great representatives of that life. From analog to digital watches and then moving forward to the era of smartwatches, we have come a long way. Moreover, the new Apple Watch Series 7 took this evolution to the next level. And, still, they are improving its functionality at a consistent level.

Apple Watch has taken over of its most competitors just after entering into the Smartwatch’s segment. However, Samsung gave good competition to Apple by launching its Galaxy Watch series. Still, the popularity of the Apple Watch is more remarkable than any other smartwatch.

Furthermore, Apple is working on a brand new Apple watch series 7 that is known for its more rugged exterior. And, this feature already separates it from the likewise Smartwatche products in the market. Alongside the rugged exterior, the Apple Watch Series 7 has come with several boosts. For instance, a new health sensor, enhanced display, longer battery life, and a brand new flat-edged layout.

So let’s get started.

The new Apple Watch Series 7 allegedly has a faster processor. Also, you will see some considerable changes in the S7 chip, as compared to the S6 chip.

Plus, you will see more details in the design and format. Lots of Tech giants are claiming it to be a lot more thinner. Also, the new Apple Watch features a new 5G modem. As a result, you will get a lot faster speed than your predecessors.

At the present time, you won’t see a Smartwatch with a 5G modem feature. So this single feature will make a significant difference in the market. Although, a Modem’s antennas are quite large to fit into a Smartwatch. Therefore, Apple Watch Series 7 might get ultra-wideband technology in it. This technology also can help you to unlock compatible car doors even without having the car keys. It feature might be very useful, especially if you got an emergency. For instance, if you lose your car keys at night, you can use your Apple Watch 7 to unlock your car.

Here are the features you might see in the new Apple Watch Series 7: 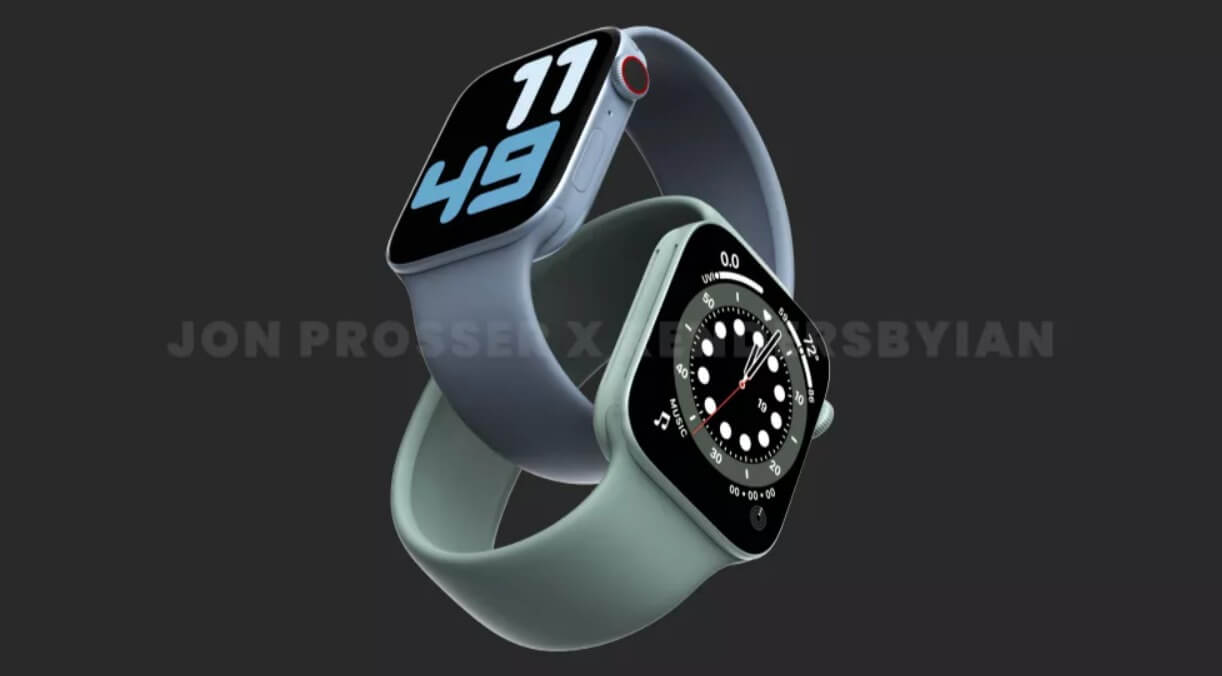 The redesigned layout of the Apple series 7 could be a crucial step that Apple ever made. A reliable analyst named Ming-Chi Kuo claimed it as such a tremendous deal. Well, I think, they won’t show much negligence while re-creating their top-notch products. Although, Apple had taken unconventional steps in the previous years such as removing the headphone Jack in iPhone.

If you see the rumors from John Prosser, the new design borrows design traits from Apple’s latest product releases. It will feature a flatter-sided design rather than the rounded designs of its predecessors. Allegedly, it is inspired by the iPhone12’s squared layout.

Furthermore, Apple watches series 7 has even bigger cutouts for the speakers which result in improved and louder sounding audio. Also, Apple is allegedly intending to release a brand new green color this year with the aluminum variant gets. Well, we can see Apple has been experimenting a lot with colors these days.

Another component of the anticipated design you will see in Apple Watch is the edge-to-edge screen. Bloomberg’s Mark Gurman reports the new Apple Watch Series 7 will have 1.9 inches diagonally, up from 1.78 inches with a resolution of 396×484. Also, it will be available in 41-millimeter and 45-millimeter sizes.

Flexible Screen and No Digital Crown 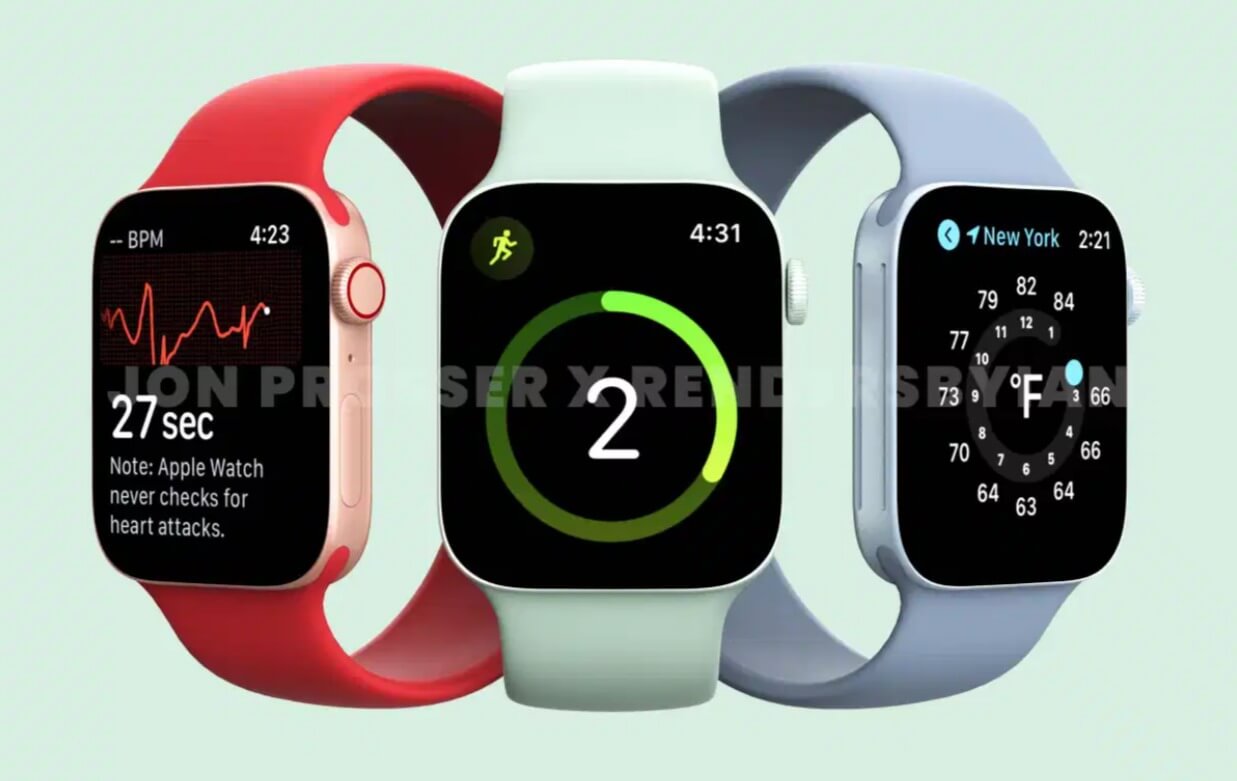 This raised structure also occurs to give birth to no Digital Crown. However, it could also mean that we will see Digital Crown elsewhere. Moreover, according to Jon Prosser’s leaks, the display might be the same as its past generations. Although, the new Apple Watch might get smaller bezels. So you will get a bigger screen and a better viewing experience.

The Apple Watch Series has been long rumored to feature a micro-LED display. This feature was supposed to arrive on the current series. Although, that didn’t seem to happen in Apple Watch Series 7. Now we can expect to see it in the next Apple Watch Series. Moreover, Macrumors reported, Apple could be working with a Taiwanese manufacturer to bring new panels to the Watch in 2021.

There are also more changes to the screen display. For this year, Apple has tested narrower display perimeters and a new lamination technique to bring the display closer to the front cover. It will also get updated ultra-wideband functionality, similar to what we’ve seen in the Apple AirTag.

There’s been a conversation for a while now about Apple replacing the OLED displays on the Apple Watch with either mini-LED or micro-LED panels. The benefit of the newer displays is that they can be thinner and offer better energy efficiency. Therefore, you might see a longer and improved battery life. Also, the new Apple watch series 7 will get smaller bezels on the front display. Moreover, the new screen lamination technique to push the display closer to the glass reducing any air voids.

Apple has financed all prior bands with each prototype of the Apple Watch, but a new design could tell that modern bands aren’t backwards similar. Of remark, the Solo Loop bands aren’t compatible with any model before the Apple Watch Series 4, when Apple introduced the larger display models.

The current Apple Watch Series 6 has an S6 SiP (system in package) with a 265.9-mAh battery. And, it has the same battery life of 18 hours as the past three series of Apple Watch. Although, it is predicted that the upcoming model will feature an S7 SiP. Also, Macrumors reported that Apple will use a double-sided S7 chip made by Taiwan’s ASE Technology. This new double-sided technology allows Apple Watch Series 7 to do module miniaturization and make the overall chip smaller. Therefore, Apple will use that extra space to add additional components to it. For example, a larger battery.

Apple has promoted fitness tracking on the Apple Watch since its release, and that’s unlikely to change any time soon. The device will support the same fitness-tracking features as on the Series 6, but it may add some new ones too. One of them can be the presence of a glucometer. Also, you might see a swim tracking feature in the upcoming Apple Watch Series 7.

Moreover, the Sleep app lets you track, and schedule your sleep hours. Plus, the Sleep Mode will automatically turn on the DND mode and keeps your phone from waking. This feature helps you to follow a healthy bedtime routine to increase sleep quality. Fitness apps and Hearing health are still here to get you updates on a healthy lifestyle.

Also, some publications claimed that Apple would skip health sensors for the upcoming model and introduce them in the 2022 model. Although, it will leave empty room for the battery up-gradation. However, Apple Watch Series 7 might feature a couple of health-focused sensors. Still, it is rumored, blood glucose and body temperature sensor will be present in the model released in the year 2022. However, we might be able to catch panic attacks and stress levels in the new Apple Watch.

Survive insanity that the regular Apple Watch is unlocked specifically formerly per day and it remains unlocked as long as it’s on the consumer’s wrist, and even that isn’t much of a complication as you can simply put it on and then trigger Face ID on the paired iPhone. This feels like a treatment to a crisis not many people are arguing about this.

Another new feature you are going to discover in Apple Watch Series 7 is a little pandemic philic idea, it is the Automatic detection for hand wash. Well don’t get your hopes high, this is one of the eligible rumors. It is yet said that while washing hands the audio of water splashes from the tap and the rubbing of your hands will be detected through the sensors and the smartwatch will allow you to wash your hands for 20 seconds.

Customizing your watch face is one of the people’s favorite things about smartwatches, it will be as per your accordance and there is also a feature that you can share your watch face with your friends.

Apple added a wide range of Watch Faces to try in the new Apple Watch. Also, you will see more ways to create new watch faces and customize them accordingly. Moreover, you can share your created Watch Faces by texting, emailing, and posting a link online. Alongside, powerful complications to create a customizable face in one click. For example, one-click to add a Watch Faces with World Clock.

Apple has been releasing a new smartwatch every year since 2015. Here are the release dates of the previous Apple Watch launches, from the 3rd generation:-

Furthermore, Apple launched the iPhone12 and other 2 devices while launching the Apple Watch Series 6. Also, they made them accessible for purchase at the exact time. So we might expect to see another product in the Apple keynote 2021. If that’s the case, the Apple Watch 7 could arrive alongside the iPhone13. However, if we point out this iPhone 13 release date story, Apple might launch Apple Watch 7 around 8 September. On the other hand, we might see a delay due to the production issues, possibly the bigger screen.

Well, the pricing on the Apple Watch series has held relatively constant over the years. At launch the previous three models were priced as followed:

This time prices can be a little entangled because as you wish to buy an aluminum stainless steel titanium body. In addition, it also depends on what kind of strap you will pick in the Apple Watch Series 7.

Apple Watch Series 7 is expected to see a few changes, mostly the design front and layout configuration. But it will not affect the pricing of the new Apple Watch as the brand has been finely stationary with the same. The current iteration, the Apple Watch Series 6 with 18-hour battery life, and housing a 265.9 mAh battery start at Rs 40,900 ($399).

So this is everything you could know about the Apple Watch Series 7. We tried to cover all the leaked information and rumors around it. And, as you can see its new features, it could be an ideal choice for those who are much interested in sports or physical activities. Especially, if we talk about that Apple might launch a rugged watch in 2022.

Also, you can see rumors, Apple is tending for the health-focused features like blood glucose and body temperature sensors that were supposed to appear in the next year’s model. But for now, these are the updates that you’ll receive in Apple Watch Series 7.

Let us know in the comments what do you think about the new updates. And, don’t forget to share this post with someone who is thinking about buying the new Apple Watch Series 7.